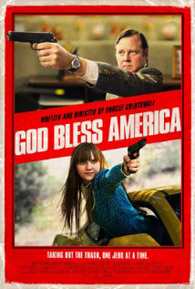 Author: crushingaflood from Portland, OR (USA)

Bobcat Goldthwait's scathing critique on modern pop culture is vicious, unapologetically ugly and truly hilarious. Whereas Mike Judge's "Idiocracy" was a clever yet far fetched tale of humanity gone stupid, "God Bless America" uses, with absolute precision, a scalpel to peel back layer after disturbing layer of American shallowness and cruelty. Incorporating elements of mindless pop culture, media propaganda, and reality TV cruelty and bravado, this movie perfectly illustrates the all too real (and sudden) cultural cancer that people nowadays consider entertainment. It is simultaneously hilarious and morbid. 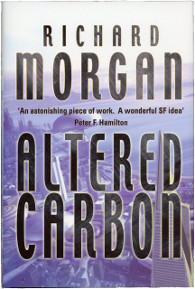 The Personal, as everyones so fucking fond of saying, is political. So if some idiot politician, some power player, tries to execute policies that harm you or those you care absout, TAKE IT PERSONALLY. Get angry. The Machinery of Justice will not serve you here - it is slow and cold, and it is theirs, hardware and soft-. Only the little people suffer at the hands of Justice; the creatures of power slide out from under with a wink and a grin. If you want justice, you will have to claw it from them. Make it PERSONAL. Do as much damage as you can. GET YOUR MESSAGE ACROSS. That way you stand a far better chance of being taken seriously next time. Of being considered dangerous. And make no mistake about this; Of being taken seriously, being considered dangerous marks the difference, the ONLY difference in their eyes, between players and little people. Players they will make deals with. Little people they liquidate. And time and again they cream your liquidation, your displacement, your torture and brutal execution with the ultimate insult that it's just business, it's politics, it's the way of the world, it's a tough life and that IT'S NOTHING PERSONAL. Well, fuck them. Make it personal. 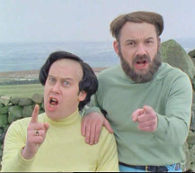 Like a shrimp in a suitcase laying on a window ledge,
like a pair of tartan slippers and they’re underneath a hedge,
like a scout master at daybreak putting peanuts in his glove,
like a specially formed ice arch for climbing over doves,
like a sardine in a hair net and he’s staring at a priest.

I not sure what this thing was about – and for sure the only time I used a running headless chicken  on a red ball as a kind of logo. It raises questions you know :)

ELL was one of my last flash sites. At the time flash (2.0 – and still my Macromedia) had no real scripting ability and a serious shortage for handling dynamic data. 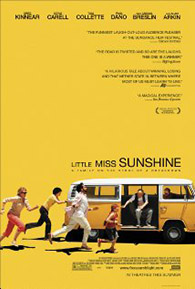 Author: P Carr (This email address is being protected from spambots. You need JavaScript enabled to view it.) from Topeka, KS

Comedies about families usually come in one of two genres. Often featuring dysfunctional families (are those two words redundant?), they are either broad and goofy ("Cheaper by the Dozen") or dark and abstruse ("The Royal Tenenbaums"). Driving its Volkswagon bus down the middle of these two extremes is "Little Miss Sunshine", a comedy both inclusive and exclusive, one that some will get entirely, while others will whiff on to the same degree.